BELOW: A sneak peek of a hog statue for a local business that is being painted by an area artist. The plan is to have all statues completed by the spring. 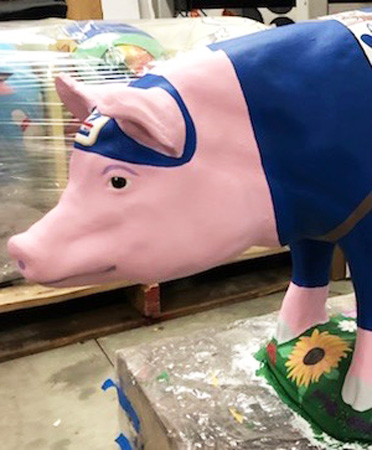 FAIRMONT–Several months ago, a call was put out looking for area artists to work on a community project– painting hog statues. Going Hog Wild hopes to serve as a way to draw attraction and tourism by promoting businesses, organizations and cities throughout Martin County.

Going Hog Wild is a collaboration between Project 1590, Martin County Arts Council and Bacon Capital USA. Alex Young-Williams, a Lead for Minnesota Fellow serving Fairmont through Project 1590, is also a member of the arts council. He said Project 1590 received an $8,000 Prairie Lakes Arts and Cultural Heritage grant to use for the project. Some of that money will allow for each artist to receive a $300 stipend for each hog they compete.

Young-Williams said they ended up receiving 16 applications from area artists. Each artist is painting one or more statues, which have been claimed and sponsored by area business and organizations.

The hogs will also promote Martin County as it’s in the top five pork producing counties in the country.

“I’ve set up a schedule so there’s about four hogs being worked on every two weeks,” Young-Williams said.

Jeff Rouse, a member of the arts council, said they’re starting with 32 statues. As a long-term goal, Rouse would like to see 100 located throughout the county in the next three years.

Each statue is 2 ft. tall, sits on a 2 ft. platform and weighs about 400 pounds. The statutes were made locally in Minnesota and they’re currently sitting in a nearby warehouse.

The artists began painting them, in shifts, in December. Young-Williams said they have provided ten cans of paint, of all different colors, so artists can mix and match. He said this should provide enough color difference to allow for very unique hogs.

“Each sponsoring business has paid for their own hog. Because of that, we decided they should have some input on the design so Jeff and I have been connecting the artist with the business,” Young-Williams explained.

He said they’re encouraging artists to have a design that’s also ran past himself, Rouse and area artist Nancy Katzer, who are all on the project committee.

Young-Williams said they want to make sure the design is not just the logo for the business, as they want it to be artistic in some way.

Jori Boeckman is one of 16 area artists painting several of the hogs.

“My husband found out about it in the paper and said, ‘hey, this would be a really good thing for you to do.’ So I went ahead and did it,” Boeckman said.

Boeckman was drawn to the project, not only as an artistic project to work on, but as a way to give back to the community that has given so much to her and her family since moving here in 2007.

“It’s been a fun experience and I’ve actually met quite a few great people because of it,” Boeckman said.

She also touched on the fact that the project is another way to bring art into the community and especially show young people its various uses.

“We want to teach them that creativity has a point. It’s not a disposable skill. It’s not only a career, but a way for them to have an outlet with all the stressors in life,” Boeckman said.

Finally, Boeckman shared that she believes the project serves as a way to highlight the surrounding community.

“I think this is another way to bring people into the community. If you take pride in where you live, it’s a way to keep people there,” Boeckman said.

Young-Williams said their goal is to have all of the hogs painted by the week of May 9.

He said they’re hoping to have an unveiling ceremony that week where all of the finished hog statues will be showcased.

Young-Williams explained how it feels to have the project make it to this point.

“It’s exciting to move forward with something like this. I really enjoy working on these community-driven projects as part of my fellowship. It’s been a great experience coordinating between artists and the committee. I’m excited to do my part in promoting pork production in the county.”

Like Rouse, Young-Williams hopes it can become somewhat of a tourist destination.

“Anything that brings more attention to the community is a good thing,” Young-Williams said. 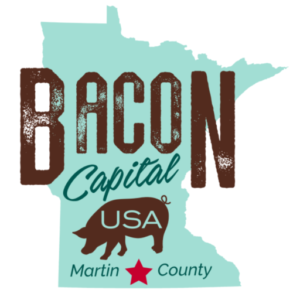